OUR VILLAGE IS MUCH TOO GOOD TO BYPASS

Our county councillor Mrs Annwen Hughes —who actually lives in Talsarnau  not Llanbedr although she is quick to point out that she was born and bred at Crafnant Farm, in Cwm Bychan — posted her manifesto for the local government elections on the village noticeboard, but she seems to have been too modest to mention a certain little word beginning with ‘b’. 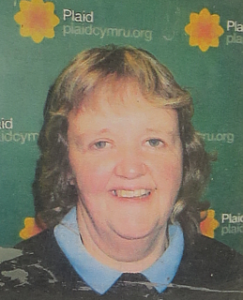 Although we learn that she will work tirelessly our behalf to ‘ensure educational success and experiences’ at the school, to see that investment at the air field benefits local people and businesses, and  promote the ‘economical benefit’ of tourism — whatever that might be —in this beautiful  area,  there is no mention of her enthusiasm for the Llanbedr bypass and, presumably, the UK Spaceport project that it is window dressing for.

Now some people may wonder quite how a bypass which will deprive local businesses of vital passing trade and help touists to speed through ‘this beautiful area’ without stopping will help with these issues. In fact it’s all rather strange  in view of some of the things that she has said and done in the past.

It was our very own Cllr Hughes who wrote to Gwynedd Council in November 2013 asking them to use Welsh Government funding to ‘build a new road around the village of Llanbedr’ and regretting that this ‘has not yet been considered a priority’. And hey presto, now we seem be getting a bypass whether people in Llanbedr really want one or not.

Her request instantly found favour at the Highways Department offices in Caernarfon who replied:

… Due to the financial situation we are working in it is unlikely that it will be possible to secure the millions of pounds necessary to realise the plan. …

… Constructing a new road to Llanbedr airfield, which is identified as a Wales Enterprise Zone, is a different matter. …

… we have established that there is potential to apply for funding to conduct a feasibility study.

So the bright idea of calling a bypass a new access road to the airfield was born, and Cllr Hughes has every reason to accept full credit for initiating  this scheme that will undoubtedly change Llanbedr for ever if it happens. Now surely that’s something for any red blooded politician to boast about on their election poster isn’t it?. So why did Cllr Hughes not mentioned the bypass at all?

Could the reason be something to do with what happened after Cllr Hughes appeared before the Gwynedd Council Cabinet to give her views on the bypass — and only the views of people who are enthusiastic about the scheme. Perhaps if you live 7 miles away in Talsarnau it is a a bit of a handicap when it comes to representing all the competing opinioins in the community, as a councillor is supposed to do . Her enthusiasm on this occasion was overwhelming as she told the cabinet that:

“This has been a very long time coming and people are shouting for it”
“everybody is screaming for it really.”…
“When is the work starting  – they  want it yesterday.”

But after the Cambrian News accurately reported her virtuoso performance under the headline, ‘Everyone in Llanbedr wants the bypass yesterday’, she replied to a constituent who complained that this was a bit one sided and not really an accurate representation of  opinion in the village,  saying that:

I have not once stated that everybody in the village wants the bypass as I know a small majority is against it.

Which is even  more surprising as she had also told the cabinet meeting:

… there’s a small percentage of objectors of course — they’re always in contact all the time and I don’t know what for, but as I said we do welcome this [the plans for a bypass] today.

But all councillors are supposed to understand the opinions of all those that they represent, and then represent them , even if they have to hold their noses while doing so.

Surely Cllr Hughes must understand why people living in Llanbedr who will be affected by a major road scheme that they never asked for, and which will blight the thier homes and harm businesses in the village, are not rejoicing at the prospect, even if it may ease her own visits to her old home.

So why not mention the bypass when she wants to be re-elected to her £13,000 a year voluntary position on the council? Could it have anything do to do with the fact that she is also a paid employee of four community council’s in the area: Harlech, Talsarnau, Llanfair and Dyffryn Ardudwy. After all, these villages may see a Llanbedr bypass quite differently to those who will be directly affected by it.

Well perhaps it was better to say nothing. Could it even be that at least one local politician, who has enthusiastically promoted developments that may kill Llanbedr, has come to realise that bypasses and spaceports are politically toxic now the spotlight has been turned on them.

Anyway, many congratulations to Annwen, not only for her apparent modesty, but also for getting her priorities right as a devoted Plaid Cymru Gwynedd Councillor. It’s obviously so much more important to hold out hope for all those unemployed space scientists living in the area who may now be able to find work once the bypass paves the way for a spaceport, even if it does mean that two major employers in the area will have to be closed down to make way for that development with a loss of dozens of permanent jobs for ordinary locals. And why should Plaid Cymru care if one of the more robust rural communities along the Cardigan Bay coast is reduced to being a lifeless dormitory village, which everyone bypasses, when there is the chance of bringing the UK Spaceport to Wales?

Cllr Annwen Hughes was re-elected to Gwynedd Council on 4th May 2107 with 303 votes out of a total of 391 cast (7 ballot papers were rejected) on a 49% turnout, so further congratulations are now due to her.